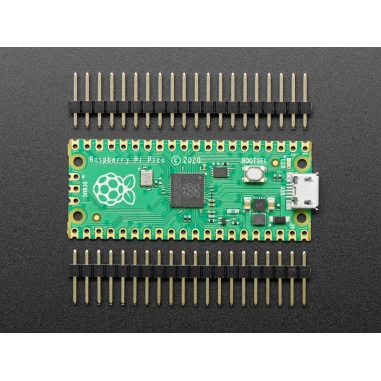 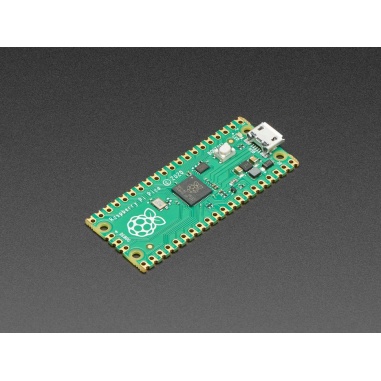 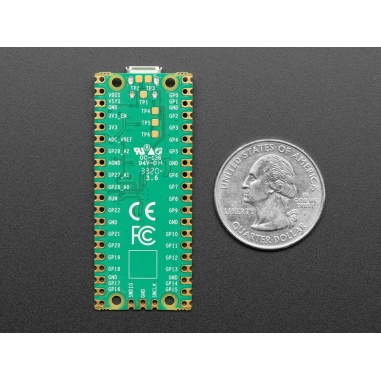 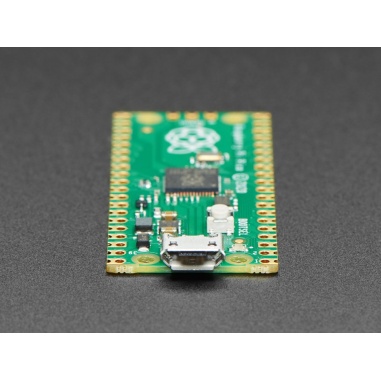 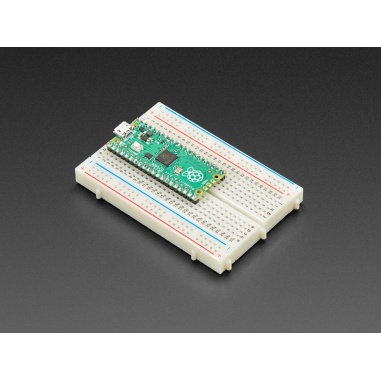 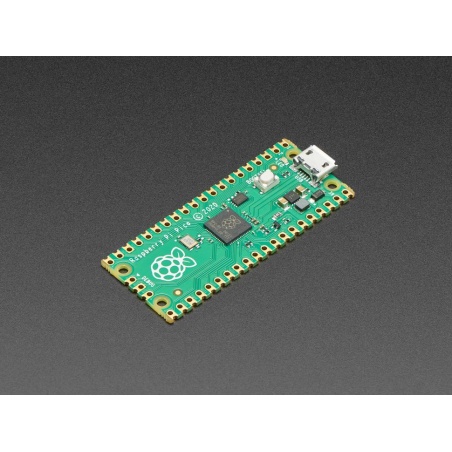 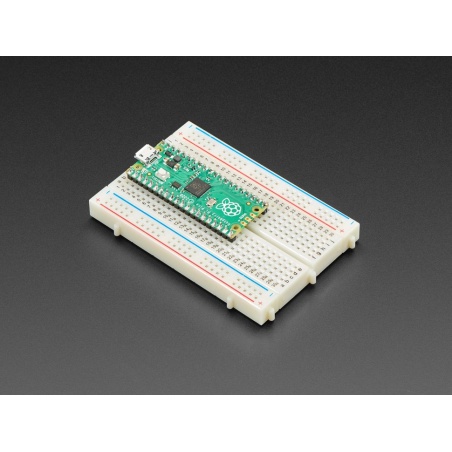 The Raspberry Pi foundation changed single-board computing when they released the Raspberry Pi computer, now they're ready to do the same for microcontrollers with the release of the brand new Raspberry Pi Pico. This low-cost microcontroller board features a powerful new chip, the RP2040, and all the fixin's to get started with embedded electronics projects at a stress-free price.

The Pico is 0.825" x 2" and can have headers soldered in for use in a breadboard or perfboard, or can be soldered directly onto a PCB with the castellated pads. There's 20 pads on each side, with groups of general purpose input-and-output (GPIO) pins interleaved with plenty of ground pins. All of the GPIO pins are 3.3V logic, and are not 5V-safe so stick to 3V! You get a total of 25 GPIO pins (technically there are 26 but IO #15 has a special purpose and should not be used by projects), 3 of those can be analog inputs (the chip has 4 ADC but one is not broken out). There are no true analog output (DAC) pins.

On the slim green board is minimal circuitry to get you going: A 5V to 3.3V power supply converter, single green LED on GP25, boot select button, RP2040 chip with dual-core Cortex M0, 2 MegaBytes of QSPI flash storage, and crystal.

Inside the RP2040 is a 'permanent ROM' USB UF2 bootloader. What that means is when you want to program new firmware, you can hold down the BOOTSEL button while plugging it into USB (or pulling down the RUN/Reset pin to ground) and it will appear as a USB disk drive you can drag the firmware onto. Folks who have been using Adafruit products will find this very familiar - we use the technique all our native-USB boards. Just note you don't double-click reset, instead hold down BOOTSEL during boot to enter the bootloader!

The RP2040 is a powerful chip, which has the clock speed of our M4 (SAMD51), and two cores that are equivalent to our M0 (SAMD21). Since it is an M0 chip, it does not have a floating point unit, or DSP hardware support - so if you're doing something with heavy floating point math, it will be done in software and thus not as fast as an M4. For many other computational tasks, you'll get close-to-M4 speeds!

You'll note there's no I2S peripheral, or SDIO, or camera, what's up with that? Well instead of having specific hardware support for serial-data-like peripherals like these, the RP2040 comes with the PIO state machine system which is a unique and powerful way to create custom hardware logic and data processing blocks that run on their own without taking up a CPU. For example, NeoPixels - often we bitbang the timing-specific protocol for these LEDs. For the RP2040, we instead use a PIO object that reads in the data buffer and clocks out the right bitstream with perfect accuracy. Same with I2S audio in or out, LED matrix displays, 8-bit or SPI based TFTs, even VGA! In MicroPython and CircuitPython you can create PIO control commands to script the peripheral and load it in at runtime. There are 2 PIO peripherals with 4 state machines each.

At the time of launch, there is no Arduino core support for this board. There is great C/C++ support, an official MicroPython port, and a CircuitPython port! We of course recommend CircuitPython because we think it's the easiest way to get started and it has support with most of our drivers, displays, sensors, and more, supported out of the box so you can follow along with our CircuitPython projects and tutorials.

While the RP2040 has lots of onboard RAM (264KB), it does not have built-in FLASH memory. Instead, that is provided by the external QSPI flash chip. On this board, there is 2MB, which is shared between the program it's running and any file storage used by MicroPython or CircuitPython. When using C/C++ you get the whole flash memory, if using Python you will have about 1 MB remaining for code, files, images, fonts, etc.

These are two very different devices, a microcontroller and a microcomputer, intended for different purposes. Pico is a great device for dedicating to a very specific task, whereas Zero is a multipurpose device. Raspberry Pi Zero has HDMI out, a camera interface, etc; Raspberry Pi Pico does not. However, Pico has an on-board ADC as well as other peripherals not present on Raspberry Pi Zero, and consumes considerably less power; it is therefore much more suited to embedded applications than Raspberry Pi Zero.

Like other microcontrollers, it doesn't run an OS by default, but we supply a SDK which provides a rich library of functions for using the hardware/features of the chip, along with higher-level functionality often found in an OS. You can use this to write “bare metal” C/C++ applications easily, or you can use MicroPython, which is even simpler for beginners.

Not yet, but they will be on general sale in the near future. Watch out for the announcement!

The Raspberry Pi Pico board design files are open-source, along with all the provided software, examples, and documentation. The internal design of the RP2040 microcontroller itself is not open-source.

No, but we do expect third parties to port their own development systems to RP2040/Pico over time. For launch, alongside the very comprehensive C/C++ SDK, there is an official port of MicroPython. Adafruit has also ported CircuitPython to RP2040.

It depends; often RP2040 will survive, but it is not recommended, and can reduce the life of the microcontroller.

The maximum clk_sys clock speed is 133MHz at normal core voltage (1.1V ±10%), but it can be overclocked. However, this requires more power and a higher core voltage, and may affect the life expectancy of your device. No warranties are given when running outside of the limits specified in the datasheet.

There is no specific low-power mode, but you can do various things to reduce power consumption: slow the system clock, power down some of the memories, gate the clock to peripherals, reduce the core supply voltage, etc.

There are two specific modes for turning off parts of the device when not being used:

SLEEP mode is when processors are in wfi/wfe and DMA is inactive, so you can shut off most system clocks, including things like bus fabric.

DORMANT mode is when you shut down all oscillators, and so is lower power still, but then you have fewer options for waking.

At the moment you need to use the command window in VSCode to set a gdb breakpoint.

Our development work has been using the more common versions of GCC as supplied with various distributions. We have checked builds using major gcc versions from 6.3.1 to 10.2, so all of those should work.

We are currently working on characterising this, and will update the datasheet. 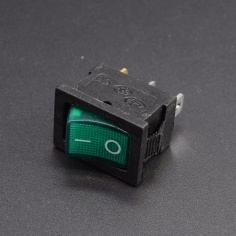 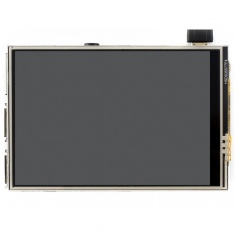 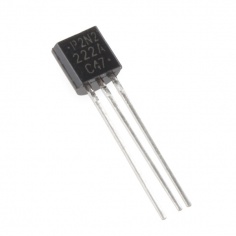 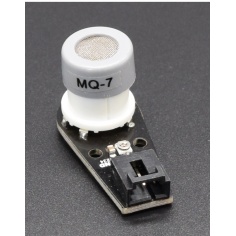 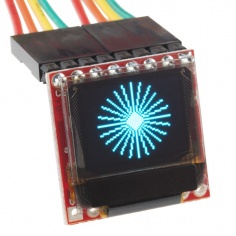 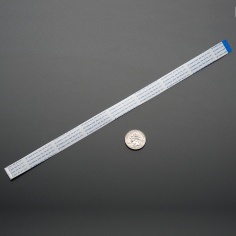 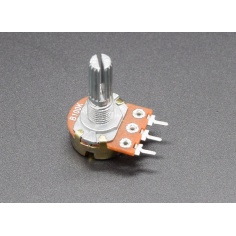 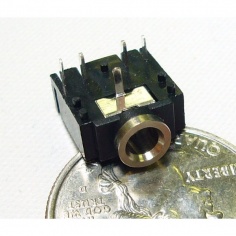 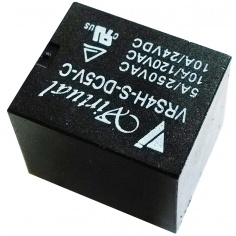 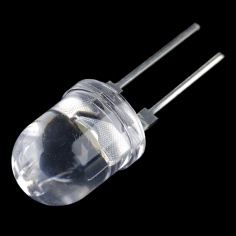